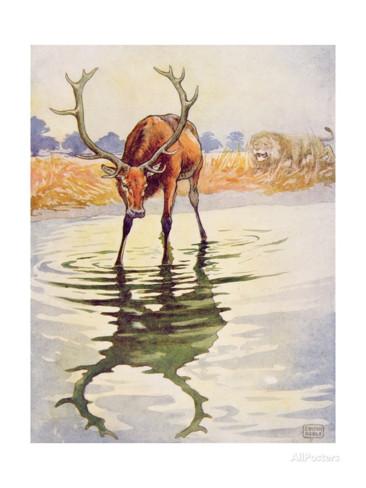 A Stag, drinking from a crystal spring, saw himself mirrored in the clear water. He greatly admired the graceful arch of his antlers, but he was very much ashamed of his spindling legs.

“How can it be,” he sighed, “that I should be cursed with such legs when I have so magnificent a crown.”

At that moment he scented a panther and in an instant was bounding away through the forest. But as he ran his wide-spreading antlers caught in the branches of the trees, and soon the Panther overcame him. Then the Stag perceived that the legs of which he was so ashamed would have saved him had it not been for the useless ornaments on his head.

We often make much of the ornamental and despise the useful.

How can we as parents make sure that our children don’t fall into the trap of valuing looks over substance?

Descriptive Praise; “I noticed that you’re sharing your toys” as opposed to Evaluative Praise; “Good Boy” is a ninja parenting tool that helps develop self esteem in children.

Descriptive Praise is specific and requires more effort on the bestower’s part than the vague platitudes of Evaluative Praise: It describes the values and behaviour that as parents we’re trying to encourage: “I’m so pleased that you’re trying new foods today”, or even the absence of bad behaviour: “I know you don’t like it when your sister takes your toys so well done for not hitting her”.

A child really feels validated and heard when instead of “Wow, you’re a great artist”, they get “I love how you painted the sky different shades of blue”, or “Where did you get the idea to do draw the sun like that?” They’re not being evaluated, they’re being cherished for their specific qualities.

It’s never too early to start, but to be honest, it’s as much about training yourself in the art of descriptive praise when your babies are tiny. It feels weird at first; “You rolled over!” as opposed to “Clever Girl” but I promise, you’ll reap the rewards when your little ones reach the truculent twos.

Perhaps if the stag’s parents had used descriptive praise; “You can run so fast now” as opposed to “Who’s my big beautiful boy” the stag wouldn’t have spent so long staring morosely at his reflection and the story would have had a happier ending!

All the best, Clare & The Team.

PS: Don’t worry – in next week’s class the stag untangles himself (cue the Shake Shake Shake song) and, having learned an important lesson about what things have REAL value in life, lives happily ever after!